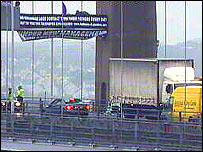 A man who has been protesting on a bridge on the Devon and Cornwall border is ending his fifth day 20 feet up on the gantry.
Jolly Stanesby, 35, a registered childminder from Ivybridge in Devon and member of the pressure group Fathers 4 Justice, climbed onto the gantry over the Tamar Bridge at Plymouth on Friday morning.
The start of the protest caused chaos to commuter traffic and the bridge was closed for 90 minutes.
Mr Stanesby was joined by three other protesters at the beginning of the demonstration, who were later arrested.
The first woman to take part in one of the protests, mother-of-one Jayne Woodman, 36, a human resources manager from Swansea, south Wales, was released without charge.
A 38-year-old man and a 46-year-old man, both from London, were released on police bail to return at a later date.
The demonstration on the bridge has prompted a review of security measures by its management team.
Mr Stanesby also demonstrated at the Royal Courts of Justice in London in October. 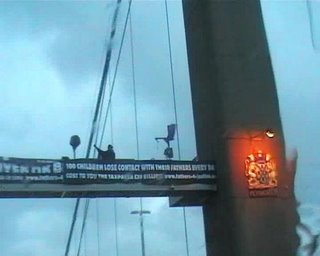 A Fathers for Justice protester who caused traffic chaos after spending a week camped above the Tamar Bridge has walked free from court.

The prosecution at Plymouth Crown Court dropped the case against Jolly Stanesby, saying there was not a realistic chance of a conviction.

Business leaders said the protest had caused delays and frustration.
Mr Stanesby, 39, of Ivybridge, Devon said he wanted to draw attention to the plight of fathers.

Mr Stanesby is a veteran of Fathers 4 Justice protestsLong tailbacks resulted on both the Devon and Cornwall sides of the Tamar Bridge when Mr Stanesby and other protesters climbed onto a 20ft-high gantry on 23 January.

Devon and Cornwall Business Council said the delays had lost £5m of business.
"There is a tremendous amount of anxiety and anger about this, particularly among small businesses," said chairman Tim Jones.

Mr Stanesby, who had been accused of causing danger to road users, said after the case: "I do not see it as causing a lot of inconvenience. They didn't close the roads.

"I feel very strongly about these views and the general public need to know what's going on."
A Devon and Cornwall Police spokesman said: "Each case is considered on its own merits and the Crown Prosecution Service will be made aware of any new information, even if it does not support the prosecution.

"We will look closely at the circumstances of this case to see what we can learn to help us deal with this type of protest in the future".
Posted by Jolly Stanesby at 10:43