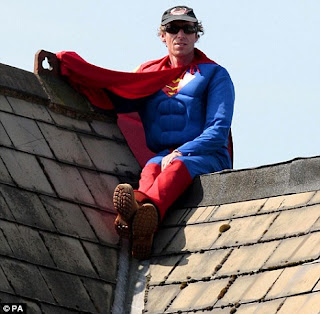 Firstly,
I would like to thank everyone for all their support and for all the letters, messages, and donations while I was in prison, following the roof top protest on Harriet Harman’s roof.

I feel honoured at the response by everyone, including the judge who sent me down, I feel the fact they are fighting back in this manner shows we are a thorn in their side and they do not like the fact that we are exposing them for what they really are.

Hundreds of Suffragettes were imprisoned before they affected change; Nelson Mandela spent 30 years behind bars with international support before that corrupt government made changes, Martin Luther King was shot dead.

So the reality is this corrupt government will not take any notice of a few of us writing letters and moaning about the persecution and abuse of our children, and us parents fighting for the rights of our children to be allowed a balanced upbringing by both their parents after separation.

The maximum sentence, for my crime of standing up against the biggest abuse of our human rights since the holocaust, was 3 months prison, with which you serve half, so that would be 6 weeks, surely that is a price anyone can pay if it will make a difference for our children.

I enjoyed a good rest from the continuous bombardment of relentless, useless paperwork of, recommendations, false accusations and unfactual biased, twisted reports that comes with you wanting to be a responsible parent.

It was an experience I am glad I have had, I was treated well, and if you’ve endured the family courts, it was nothing.

If we want change from the disease which is family law. This epidemic of pain and suffering forced on innocent children and ourselves by untamed corruption by our government, in particular by individuals such as Harriet Harman, with her anti-men agenda, and her determination to destroy the family.

If we want what is needed, radical change. Then it requires radical action, determination, effort, UNITY and some form of personal sacrifice.

We are now in a stronger position than ever, with the integrity of the family court, gravy train in tatters, and two good parents clearly recognized as the most positive way forward for our children.

And with a never ending collection of determined, dedicated, reliable, activists and individuals, all now that is needed is a concerted, driven effort to change things.

We all have one aim, now this is the time to set aside personal differences, and keep focused and not to allow any unnecessary stumbling blocks halt our drive to succeed in what is right and just.

Because of infiltration by government informants, and groups with fested interests to leave things as they are. A degree of misinformation and the appearance of a lack of interest of certain proposals, actions and volunteers may seem apparent,

I would like to assure all people that we respect everyone's views and understand the anxieties and frustrations that apparent inaction can cause.

But many things do go on behind the scenes, and we ask for understanding, and patience as things aren’t as easy as they sometimes seem.

We have no funding, and coordinating action, the costs of materials, time, transport and penalty's all come from the volunteers themselves.

All donations are now accountable, and we desperately need financial help to progress things at a quicker speed.

We have many activists, but there are never enough, in particular we need activists willing to endure hardship, ie a few nights out in the elements.

We also want to set up a buddies scheme where individuals, volunteer to support individual activists or a parent going to court,they would be expected to appear at court, be on the end of a phone to offer help support and advice, and generally let it be realised that we work as a team and no activist should be left on there own when they have stood up for all of us.

We also need back up crews in some areas, foot soldiers, willing to do the preparation on the ground, being able to keep calm, take orders and work in a team.

We are updating our lists, and welcome all new volunteers, men and women to our coordinated campaign of non violent direct action.Our children depend on us and we will not let them down.