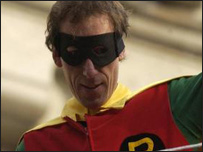 Two men have launched a fathers' rights protest on the roof of a Devon court building.
The pair climbed on to the top of Plymouth's Crown and County Court at about 0600 BST on Tuesday.
Dressed as Spiderman and Batman, Jolly Stanesby, from Ivybridge and Gary Swain, from Crewkerne, Somerset are members of Fathers 4 Justice.
Police cordoned off the front of the court, but the day's proceedings were not affected.
The two men unfurled a banner on top of the court reading: "Still the UK's worst family court."
Mr Stanesby said he was protesting against alleged injustices in child custody hearings.
"The family courts are held in secret so nobody finds these things out.
"Fathers 4 Justice wants to let people know what goes on behind closed doors."
Fathers 4 Justice campaigns for equal parenting rights and a legal presumption of contact for parents and grandparents following separation or divorce.
Posted by Jolly Stanesby at 09:25 No comments: