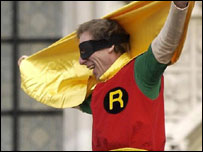 Fathers 4 Justice campaigner arrested for handcuffing himself to children's minister Margaret Hodge has been released on police bail.
Jolly Stanesby, 39, of Devon, stormed the stage at a family law conference in Salford, Greater Manchester.
The registered childminder said the stunt was the only way to get the group's message across.
A spokesman for Fathers 4 Justice said the protest was the first of a planned "Christmas of chaos".
Mr Stanesby, whose real name is Jonathan, used borrowed handcuffs to attach himself to the minister as she spoke at the conference.
The pair were cuffed together for 40 minutes before bolt cutters were used to separate them and he was arrested.
A spokesman for Greater Manchester Police said Mrs Hodge, Labour MP for Barking, was unharmed.
After being released by police, Mr Stanesby said he acted after hearing Mrs Hodge come out with the "same old rant".
He said: "I do not enjoy it, I am sick of it, but what am I supposed to do?
Posted by Jolly Stanesby at 10:16 No comments: