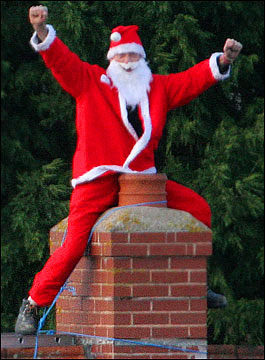 A founder member of the Fathers 4 Justice protest group has won an eight-year battle over access to his daughter.

Jonathan Stanesby, 44, was jailed for two months last year for climbing on to Labour deputy leader Harriet Harman's roof dressed as a superhero.

He also cuffed himself to ex-Children's Minister Margaret Hodge to protest that he could only see his daughter one weekend every two weeks. But following an agreement with his ex-partner, he has now obtained joint custody of his daughter.

Stanesby said yesterday: "My daughter is now living with me half the time and she's chuffed - it's what we've always wanted. I'm obviously elated but I'm also very bitter about the whole experience. It destroys your life. I'm still paying fines, I'm still in debt, and I'll probably never be able to go back to the work I loved now that I've been to prison."

The Fathers 4 Justice stunts began after Stanesby and his partner split in 2000. Stanesby, from Ivybridge, Devon, fought for shared residence and said: "I had a spacious house, I had great references, I was a registered childminder, the perfect picture of a dad. Then I went to court and I was completely and utterly humiliated.

"I was so angry -I left it a week then I climbed on to the Plymouth Courts' roof. With Fathers 4 Justice, I don't want to see something I've started go to pieces so I'll continue. But my family comes first - that was always the reason in the first place."
Posted by Jolly Stanesby at 12:01